I must disclose from the outset that I am an avid Ford fan having only owned Ford branded vehicles to date. So, I was chuffed when my editor told me I would get to sample the all imposing Ford Ranger Raptor. Do not be fooled by the reference to the Ranger in the Raptor’s name, it is no ordinary Ford Ranger, and this is immediately clear on approach and when you step in. Some have even gone as far as to call the Raptor a monster truck and I could see why because of its sheer size and ability to drive seamlessly off-road.

On first sight, I could not help but almost utter the corny “All Hail to the King” phrase because of its imposing size. The Ford Raptor is 51 mm taller than a standard Ford Ranger with 283mm of ground clearance for a more imposing ride height. The Raptor also has wider front and rear tracks by approximately 150mm and an 850mm wading depth. On the front, one is faced by a big black imposing grille with bold “Ford” letters nestled in the middle of the grille. The Raptor has an approach angle of 32.5 degrees and a departure angle of 24 degrees which gives the driver the confidence to go anywhere and take on any terrain on his or her path. The Raptor comes standard with daytime running LED headlights. The Raptor has the following colour options to choose from: Ford Performance Blue, Colorado Red, Absolute Black, Frozen White and Conquer Grey colours. Ford indicates that it partnered with BF Goodrich to develop chunky 285/70 17-inch all-terrain tyres exclusively for the Raptor and these add to the character of the Raptor. The interior cabin of the Raptor is quite impressive as it gives a bit of a sporty and premium feel. Hard plastic materials communicate work horse credentials rather than downscaling. The dashboard, side door panels, gear lever and steering wheel comprise of leather and blue stitching. The Ford Raptor also has heated sports seats that are adorned by huge “Raptor” signage. The sports seats are made of a combination of a leather and suede material. The cabin of the Raptor is also roomy, and you can immediately feel that you are in a big car, but the size is not intimidating at all. The Raptor has a touchscreen infotainment screen with Ford Synch 3 that works quite well with Apple CarPlay and Android Auto compatibility. The Raptor also has a trip computer that displays the fuel consumption and other information. Our Raptor came with front and rear collision warning as well as lane keep assist, all of which are needed and come in handy due to the size and power of the vehicle. 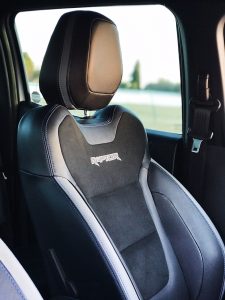 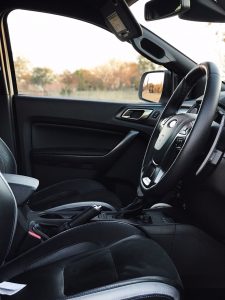 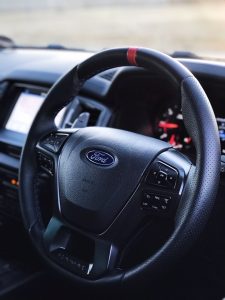 We enjoyed spending time on the road with the Ford Raptor. The Raptor is powered by a 2.0 litre Bi-Turbo diesel engine that kicks out 157kW of power and 500Nm of torque. The engine is paired with a 10-speed automatic transmission gearbox. Although we found the engine to be sufficiently capable of carrying the body of the Raptor, we did find the Raptor to display a bit of lag on take-off. But once the Raptor gets going, it really gets going and you might unintentionally see yourself over the national speed limit without even trying too hard. The engine is also refined and sounds good for a diesel motor. This bodes well for cabin ambience as these bakkies carry families now and you do not want to be competing with the engine when speaking to your loved ones. In terms of ride quality, we found the Raptor comfortable and did not feel for most parts that we were driving a bakkie. We did not do too much off-road driving in the Raptor, however in the small doses of off-road with the Raptor, we found that the Raptor to be naturally more at home there. The BF Goodrich all-terrain tyres and Fox shock absorbers do play their part on gravel and bad roads. They ensure that the ride quality remains comfortable throughout.

By Otsile Kadiege Volkswagen South Africa has announced the local availability as well as the specifications and powertrains of the recently updated T-Roc. The updated T-Roc, is positioned...

By Otsile Kadiege Volkswagen’s all-new, hotly-anticipated Amarok bakkie has finally been unveiled. The first-ever VW Amarok was launched back in 2010. Since then the Wolfsburg-based automaker’s pickup truck...

By Staff Reporter The Forturner leads the pack in its segment locally. Consumers just can’t seem to get enough of the 7-Seater SUV. To keep the magic going,...

By Staff Reporter Kia’s SUV range is expanding with the recently launched and made in India Kia Sonet. The fresh-faced SUV slots below another India made Kia SUV,...

By Sala Masindane Toyota has long cemented itself as a household brand that delivers across all segments. The Fortuner has been carried that ethos for a number of...

By Zethembise Dlamini (Motoring Intern)  The Audi Q family has grown bigger with the addition of its all new Audi Q8. The SUV Coupe is 4.99 meters long,...